Are sinkholes common in your state? Is there a sinkhole in your own neighborhood? If so, you’re probably wondering if your property will be impacted, and what you can do about it. Using ground penetrating radar (GPR), GeoModel, Inc. can conduct sinkhole investigations without disturbing your property.

What is a sinkhole?

A sinkhole (also known as a cenote, sink, sink-hole, shakehole, swallet, swallow hole, or doline) is a depression or hole in the ground caused by some form of collapse of the surface layer. Whether formed by natural geologic processes or human activity, sinkholes can vary in diameter, depth and form.  While some are soil-lined bowls, others can be bedrock-edged chasms.

Where do sinkholes form?

Sinkholes may be formed gradually or suddenly, and are found worldwide. Sinkholes can occur anytime and anywhere if subsurface conditions are just right for their formation.  Some states in the US, however, are more prone to sinkhole formation, with the most damage from sinkholes occurring mainly in Florida, Texas, Alabama, Missouri, Kentucky, Tennessee and Pennsylvania.

How do I know if my property has a sinkhole?

While a sinkhole is forming underground, the land above usually stays intact for a while. Then, the space below ground just becomes too large to support the surface weight. A sudden, dramatic collapse ensues. How can a property owner know if there is a sinkhole forming — and what steps can they take to protect their home and belongings?  First, it’s good to know the common signs of a sinkhole. 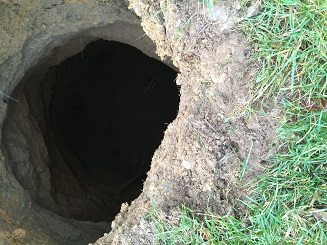 Ground penetrating radar (GPR) is the best method for detecting and mapping out sinkholes below the earth’s surface. Seasoned GPR experts like those here at GeoModel, Inc. say that the best time to have a sinkhole survey conducted is before the collapse, while the subsurface void still exists. We recommend sinkhole location surveys in a variety of locations, including:

Most of the sinkhole location surveys we’ve conducted are in karst limestone areas; however, we sometimes recommend sinkhole location investigations in areas with soft soil, in areas where water or sewer pipes have broken, or where mining or other surface or subsurface disturbance activities have occurred.

What to do if a sinkhole is forming on my property?

One thing you do not want to do is wait until a collapse occurs. There are methods to remediate a forming sinkhole before it opens up. To learn if your property has a sinkhole and for a detailed map that illustrates its extent (depth, diameter, form), contact GeoModel today

In May 2021, GeoModel, Inc. conducted a ground penetrating radar (GPR) survey to locate unmarked graves in an historic church cemetery near Black Mountain, North Carolina.  Over one acre was scanned … END_OF_DOCUMENT_TOKEN_TO_BE_REPLACED

Earlier this year in 2020, GeoModel, Inc. conducted a grave locating survey at the Stanton Family Cemetery in Buckingham County, Virginia.  The cemetery is approximately 65 feet by 68 feet and … END_OF_DOCUMENT_TOKEN_TO_BE_REPLACED