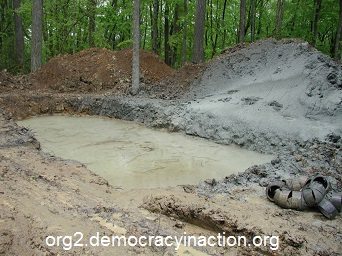 A brine pit is a surface impoundment used to store or evaporate water used in the drilling, mining, or processing industries. These impoundments are also known as evaporation pits or reserve pits.

The brine pit water may contain salts, minerals, or toxic substances that can lead to brine contamination in groundwater. After the brine reserve pit is no longer used, it is sometimes covered over with dirt or a liner. Once covered or buried, the brine pit location is difficult to detect visually.  These old, covered over, forgotten brine pits are termed “legacy brine pits”.

These legacy brine pits may have been forgotten, but the salts that they contain are still seeping into the surrounding soils.  Crops and native vegetation cannot grow in these briny soils.  Fortunately, some states have legislation in place to clean up the salty groundwater and soils, but first, the legacy brine pits need to be located.  This is where GeoModel, Inc. comes in – to locate the buried legacy brine pit.

GeoModel, Inc.’s brine pit locating survey can locate a former brine pit in real time, to a depth of approximately 20 feet. Results can be obtained in a short time period, making our system cost-effective for large industrial sites, as well as for smaller sites. Buried brine evaporation pits are located and mapped in real-time using our unique technique, and can be later computer processed and color contoured for final presentation.  Locating brine reserve pits and addressing any brine contamination plume can help alleviate any costly problems with brine in the groundwater and soils. Areas of salt-water intrusion can also be detected using GeoModel’s techniques. 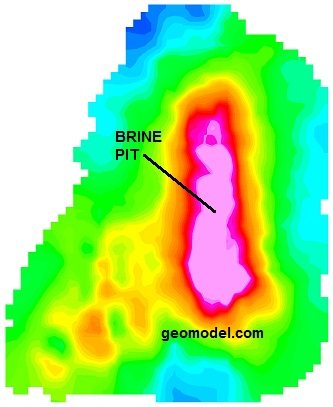 An example of an underground leaking brine pipe is shown below: 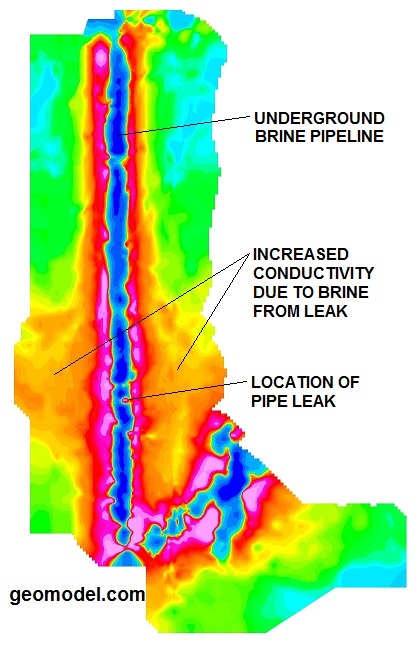 Brine spill detection is performed in the same manner.  The brine water is high in inorganics, such as sodium chloride, and the total dissolved solids (TDS) are high as well.  The readings from the EM instrument are usually linearly proportional to the levels of TDS and other inorganic salts in the brine water, making detection of the source and extent of a brine spill in the subsurface soils and groundwater relatively easy to accomplish.

In May 2021, GeoModel, Inc. conducted a ground penetrating radar (GPR) survey to locate unmarked graves in an historic church cemetery near Black Mountain, North Carolina.  Over one acre was scanned … END_OF_DOCUMENT_TOKEN_TO_BE_REPLACED

Earlier this year in 2020, GeoModel, Inc. conducted a grave locating survey at the Stanton Family Cemetery in Buckingham County, Virginia.  The cemetery is approximately 65 feet by 68 feet and … END_OF_DOCUMENT_TOKEN_TO_BE_REPLACED