A rail services yard in Texas was losing thousands of gallons of water. Water ponding on the surface of the ground indicated serious leaks in the buried metal water pipes below, but officials at the site had no idea where all of the leaks were located. To find out, the rail services yard needed an in-depth survey — and looked for a survey company that could work around issues such as the Texas clay soil and railroad tracks that could interfere with traditional metal detection readings.

They selected GeoModel, Inc. to scan the area and map out the location of the buried metal water pipes, pinpoint leaks in the pipes and detect other underground utilities. GeoModel uses a variety of techniques and instruments to combat challenges like those presented at the rail services yard site. On this project, GeoModel employed deep metal electromagnetic (EM) conductivity, ground penetrating radar (GPR) and a frequency locator. 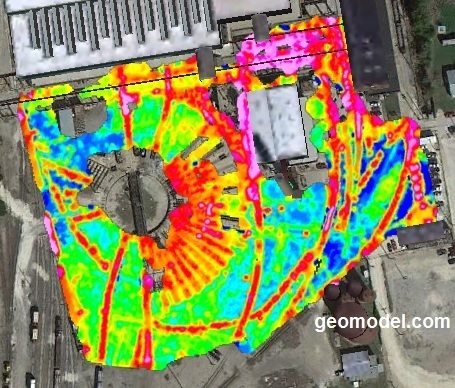 The EM instrument allowed GeoModel to get real time data on the location of most of the pipes, with indications of where the water was leaking. GeoModel also recorded the field EM data on a data logger for later downloading to a computer.  The EM data was processed into a color contour map of ground conductivity (GeoModel Map).  The color EM contour map below shows the railroad turn table, some railroad tracks, and also some locations of buried metal water pipes.

But surface metal at the yard, including the railroad tracks themselves, interfered with some of the EM readings. That’s why GeoModel also brought in a frequency locator to trace the metal water pipes across the site. A frequency locator can detect buried metal even when surface metal is present.  Most of the metal pipes were detected by the frequency locator in the passive mode, because the pipes are located by the energy given off by the pipe or utility.  To significantly increase the number of pipes or utilities that were detected, GeoModel used a transmitter to inject energy into the pipes.

GeoModel also used ground penetrating radar (GPR) in certain areas at the site.  Due to the clay soils in Texas, the GPR was limited to a detection depth of only a few feet. Usually, at project sites in areas with sandy soils or low conductivity bedrock, the GPR detection method can reach depths between 6 to 30 feet.Using data from the EM, GPR, and frequency locator surveys, GeoModel, Inc. produced an AutoCAD map showing the client the locations of underground utilities, including metal water pipes, and superimposed the AutoCAD map onto an aerial photo of the railroad services yard. Many buried water pipe locations corresponded with the areas of ponded water, indicating  the specific areas where the old network of water pipes was deteriorating and causing the ponding of water on the ground surface.  The AutoCAD map prepared by GeoModel provides a permanent record of the old water pipe network in case the source of a future water leak needs to be located.

The electromagnetic conductivity (EM) survey method can be used alone or in combination with other instruments at any facility to map buried metal pipelines, electrical lines, duct banks, landfills and conductive contaminant plumes.  A color GeoModel map is a useful tool for determining what is underground at your facility.