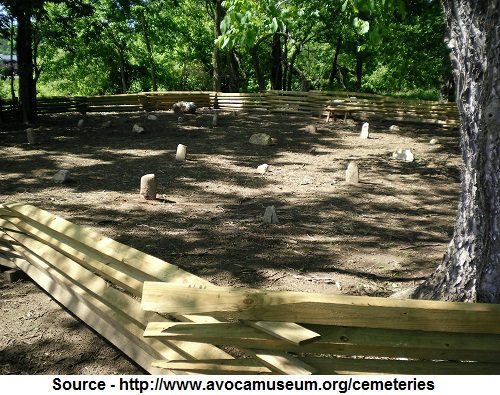 The staff and directors of Avoca Museum knew that there were former African-American slaves and at least one native American buried on the museum grounds, but they were lacking critical information.

Discovered in 2005, the cemetery presented three major challenges, says Avoca Museum Director Michael Hudson. “Many local families strongly believe they have ancestors buried here. Unfortunately, because the records of these burials are either non-existent or have been lost, we were not sure exactly how many graves there were and where they were all located.”

Hudson says the museum had done some work on the site after the cemetery was located, but could only do so much on the surface. Meanwhile, the museum needed to know if the fence around the graveyard actually encircled all of the graves. They need to place some headstones in their proper places. Lastly, the museum suspected there may be unmarked graves on the site, but had no way of knowing where they were.

“We had discovered a cluster of mostly small stones in one corner and put each stone at the head of each grave as best as we could, but we wanted to be sure it was accurate. By at least identifying where the graves are, we wanted to show a lot of respect to the people who we owe a lot of credit for the foundation of this country,” Hudson said.

To get the answers the museum needed, Hudson contacted GeoModel, Inc., in northern Virginia. GeoModel uses ground penetrating radar (GPR) surveys to map out cemeteries and detect grave sites. The non-intrusive GPR surveys can identify a grave by detecting the coffin (wood, metal, lead lined, etc) or vault, disturbed ground structure and excavation features, and movement or voids caused by collapse of the coffin.

“The museum chose GeoModel after doing extensive research on various companies that could provide these services,” Hudson says. A strong reputation, experience in doing high-profile projects, and the high level of expertise were all factors that influenced the museum’s decision to work with GeoModel. “Also, as a Virginia museum, we like to do business with other organizations in Virginia.”

Using GPR, GeoModel’s Matt Turner surveyed the entire area and quickly provided a map of what he found. Turner found 32 graves, two more than Hudson expected. There were no graves found beyond the split rail fence that borders the cemetery, which was a relief to Hudson. Many of the graves were found to be within inches of where the museum had thought they would be.

“I was really pleased with the level of service and expertise provided by GeoModel. I expected a map of the graves within a week, but received it much earlier. Matt Turner was wonderful to work with and extremely knowledgeable,” said Hudson. He encourages Altavista area residents who think they are descended from someone who was enslaved at Avoca to stop by the museum and look at the collection of genealogical information at no charge. For more information on Avoca, call 434-369-1076 or visit www.avocamuseum.org.

You can find out more about ground penetrating radar services, here or call us at GeoModel at 703-777-9788.