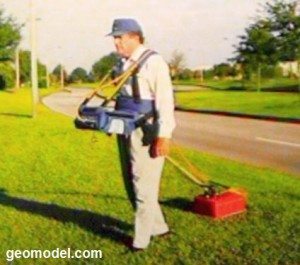 When North Springs Behavioral Hospital in Leesburg, VA wanted to expand its facilities, they needed a special exception permit from the Loudoun County Planning Department. The core of the hospital is an old country manor built around 1845 by George Washington Ball, and the surrounding 5 acre parcel of land includes the Ball Family Burial Ground and other possible areas of historical significance. Historical information, old maps and a historical marker placed on the property about 100 years ago hint at an early cemetery with hundreds of graves, perhaps dating as far back as 1720, somewhere on the property. Last, there was evidence that a possible unfinished Civil War era fort built by slave labor existed on the site.

To conduct the archaeological survey of the entire site, and to excavate the small area that would actually be impacted by the construction and building expansion, North Springs Behavioral Hospital contracted with Thunderbird Archeology, a local firm that is a subsidiary of Wetlands Studies and Solutions, Inc., Gainesville, VA. Thunderbird Archaeology worked with GeoModel, Inc. to conduct a Phase I archaeological investigation of the entire property. The purpose of a Phase I study is to determine the presence or absence of an archaeological site in the area.

GeoModel’s role in the Phase I investigation was to locate and delineate any archaeological features such as old buried walls, foundations, artifacts and possible graves. The survey area was scanned with a GSSI SIR-3000 GPR (ground penetrating radar) digital control unit and a 400 MHz antenna.  GPR transects were made 10 feet apart across the survey area in perpendicular directions.  Back in the GeoModel office, staff geologists examined and interpreted the GPR data, looking for anomalies that could possibly be archaeological features. They detected a number of anomalies near the surface, which could be possible old walls, rubble, graves, artifacts or other isolated objects or features such as bedrock.

In some portions of the survey areas, there were features in the GPR data that were valley or U-shaped.  These U-shaped features could indicate possible disturbed soil, trench areas, buried debris, or other channels or depressions in these survey areas. 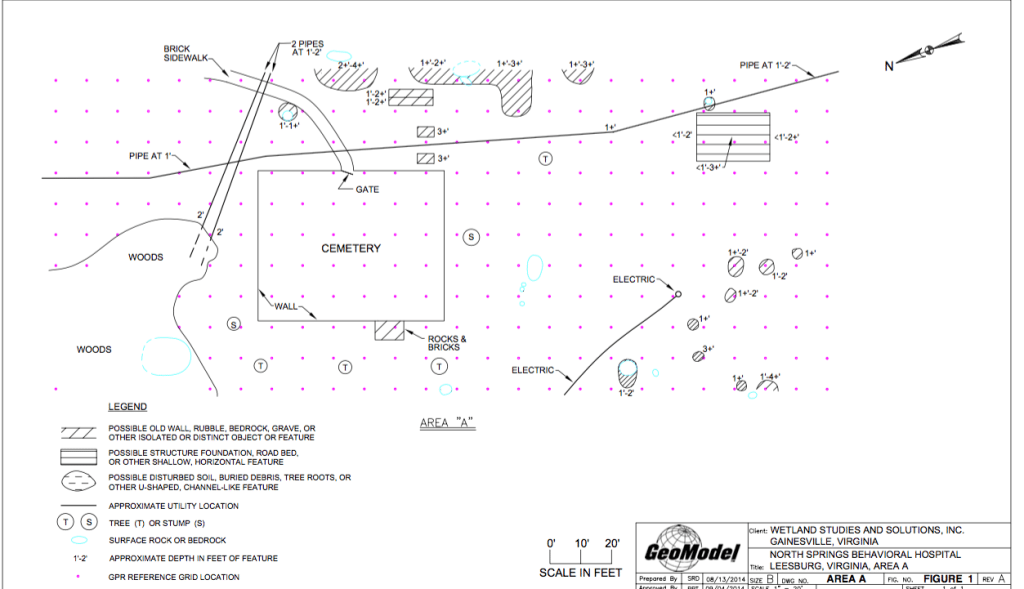 During the investigation, Thunderbird Archaeology identified six additional archaeological sites and an Archaeological Protection Area (APA) on the property. The archaeologists discovered a total of 354 historic and modern artifacts, including some very well-preserved ceramic and glass artifacts, dating back to the 1870s. Based on these results, they recommended that part of the property be considered eligible for inclusion in the National Register of Historic Places for its potential to contribute significant research information about the daily lives of the inhabitants of the Catoctin Rural Historic District from the mid-19th century to the third quarter of the 20th century.

For more information on how GeoModel, Inc. can assist in archaeological surveys, contact us today.

In May 2021, GeoModel, Inc. conducted a ground penetrating radar (GPR) survey to locate unmarked graves in an historic church cemetery near Black Mountain, North Carolina.  Over one acre was scanned … END_OF_DOCUMENT_TOKEN_TO_BE_REPLACED

Earlier this year in 2020, GeoModel, Inc. conducted a grave locating survey at the Stanton Family Cemetery in Buckingham County, Virginia.  The cemetery is approximately 65 feet by 68 feet and … END_OF_DOCUMENT_TOKEN_TO_BE_REPLACED